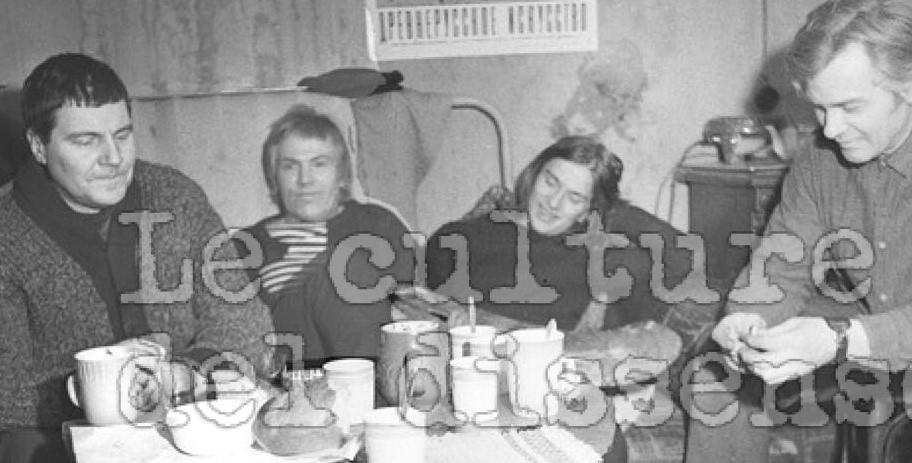 DESCRIPTION:
Also known as the Orden nishchenstvujushchikh zhivopistsev (Order of the Poor Artists) and Boltayka (from the verb boltat, meaning ‘to chat’), the circle of artists, who gathered around Aleksandr Arefev, is one of the earliest expressions of unofficial Soviet culture. Except for the poet Roald Mandelstam and Richard Vasmi, who trained at an Institute of Architecture, the members met at the Leningrad Art Middle School. Their enrolment at this institute differentiates the Arefevtsy artists from later non-conformist painters who did not have a traditional artistic education. The most innovative aspects of the group’s work are the unique ways of using colour and the attention they give to marginal topics and subjects (even geographically marginal), which were banned from official art: Shagin, during the Stalinist era, draws a prisoner dragged away by a policeman, Arefev portrays the scene of an execution, taking Goya as a model. In Arefevtsy’s paintings the darker side of the former Russian capital is represented, with courtyards, staircases and squalid chambers, but harmonious scenes are not entirely absent and stand out in contrast with the grotesqueness and harshness of other paintings. These works, painted on small canvases, are often simple drawings made on makeshift materials. The Arefevtsy artists have also been called “the last Impressionists” (Poslednie impressionisty), due to the influence that the French movement, (to which an area on the third floor of the Hermitage is dedicated) exerted on their art; they are often quoted as being an example of a synthesis of the arts, especially because of the combination of figurative and verbal languages in their works. Arefev was a legend for independent contemporary artists and a lasting influence on succeeding generations. His talent went hand in hand with an addiction to alcohol and drugs that eventually led to his arrest.  In 1977 he emigrated to  France, where he died a few months later.  Among the other members of the group, the most significant is Roald Mandelstam, the first Leningrad poet whose work was preserved, and whose reputation grew thanks to the Samizdat network. Mandelstam died in 1961 of tuberculosis at the age of only 28 after years of suffering;  of the ‘Second culture’ (Osip, unsurpassed example of civil courage during the Stalinist terror). The poet was a self-taught expert in classical culture as well as in Chinese and Japanese and had an inexhaustible passion for  European literature (especially García Lorca, who he translated) and a deep love for Russian poetry. His influence on future underground movements, especially in Leningrad was huge. The themes of his poetry, influenced by the avant-garde and modernist movements (with particular focus on Nikolay Gumilyov’s work), range from the intimate to the historical; his mystical verses can be easily included in the so-called the “Petersburg Text” of Russian Literature. During his final illness Mandelstam was confined to  his room in Kanonerskaya ulitsa, where the group used to meet: they called it  “the salon of the rejected”. The first exposition of these artists, who were compared to the contemporary American beat writers for their lifestyle, took place in 1974, in an alternative art exhibition held at the cultural circle of the Kirov Plant.