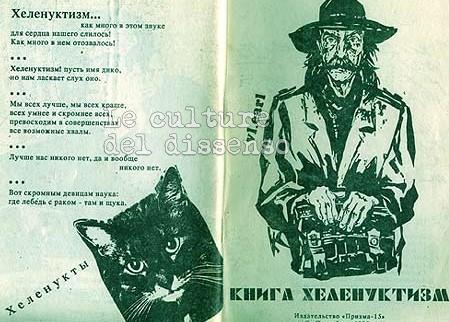 DESCRIPTION:
The Khelenukty group was founded in September 1966 by the poets Dm. M. and Vladimir Erl (pseudonyms of Dmitry Makrinov and Vladimir Gorbunov) and was the result of a series of important events in the preceding months: in May 1965 two regular visitors to Malaya Sadovaya, Aleksandr Mironov and Vladimir Erl, had gone to Moscow to visit the poets of the newly created SMOG group, with a view to collaborating on an issue of the tamizdat journal «Grani», published in Frankfurt am Main. The attempt, which would have established a link between the Moscow and Leningrad undergrounds, was thwarted by the KGB but not long after this disappointment, Erl founded the independent publishing house Polza, that during the following five years published more than seventy works. The Khelenukty’s Introductory Article (Vstupitelnaya stateyka Khelenuktov), which represents a manifesto for the group, appeared the year after, on the 16th September 1966, outlining the shared poetic principles of the writers. The manifesto is not a conventional list of common cultural goals as much as a description of ordinary daily actions (“strolling”, “laughing”, “taking a bath”, “singing”, “going to the banya”, etc.), which are subjected to a process of aestheticization, and which gain value and meaning thanks to the act of sharing. The Khelenukty group made great use of collage, a technique borrowed from Dada, which mixes heterogeneous linguistic registers (from the sublime to the popular, from bureaucratic clichés to foul language) and placed great emphasis on the process of co-writing which is evident not only in their poetry, but also in their prose miniatures, the so-called dramagedii (dramagedias). Their rich and frequent use of cryptonyms places the group’s writers in the larger context of the Malaya Sadovaya. A certain aura of mystery is found in the name of the group, whose significance is enigmatic even today. The continuous adoption of disguises and of seeking to carnivalize reality is clearly recognizable in the activity of other groups of the period, such as the Filologicheskaya shkola. The depiction of existence in terms of the absurd can be traced to the historical Russian avant-garde, the OBERIU, whose ideas were spread by the Khelenukty in underground networks. The influence of Western writers should not be forgotten, such as Dada, Beckett and Ionescos and the nineteenth-century comic tradition of Kozma Prutkov or Count Khvostov was also important. The toponyms that appear on the title pages of the volumes are fictional; the books were published first by Polza and then by the Palata mer i vesov (Chamber of measurements and weights, 1970-1978, which published about thirty titles), both of which were guided by Erl’s creative and organizational genius. The volumes published by Erl, “the Paganini of the typewriter” in Boris Konstriktor’s opinion, are remembered today for their fine graphic workmanship, which is far superior to the samizdat editions. Several writers were collaborating with the group (we recall Leonid Aronzon and Konstantin Kuzminsky). The group is also remembered as ‘Moguchaya kuchka’ (The mighty little group): A another theoretical document entitled On the Occasion of the Publication of the First Edition of the Almanac of the Mighty Group (K vykhodu 1-go vypuska Almanakha Moguchey Kuchki) should have been included in a never-realized almanac. Nevertheless, the document has been preserved and is now available. The Mitki, their fellow citizens, can be considered Khelenukty’s almost direct descendants.