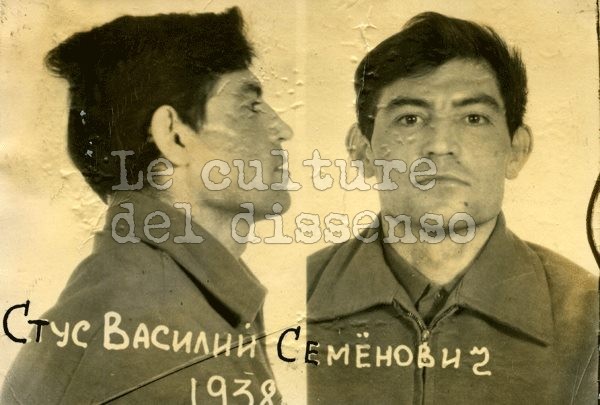 Vasyl’ Stus (1938-1985) has been defined as the greatest Ukrainian poet of the second half of the twentieth century. In spite of the importance of his literary output in the history of modern contemporary poetry, his fame in Ukraine is more linked to his activity as a dissident and his participation in the Ukrainian Helsinki Group.

Stus was born in the Vinnycja region of western Ukraine, but his family moved to Donbas when he was a child. He studied at Donec’k (then Stalino) Pedagogical Institute and planned to move to Kyjiv to undertake graduate studies at the Institute of Literature of the Academy of Sciences of the Ukrainian Soviet Socialist Republic. He managed to move to Kyjiv in 1963, when the local literary scene was undergoing a conservative restructuring after experiencing the relative artistic freedom brought about by the Thaw between the late Fifties and the first two years of the Sixties. Stus had been active as a poet since the mid-Fifties and was keen to pursue a career as both a creative writer and a literary scholar. While his first attempt to have a selection of his juvenilia published in volume failed in spite of positive internal reviews, Stus had the chance to enjoy a very stimulating atmosphere among his fellow šistdesiatnyky.

In 1965, Stus took part in a protest action following a wave of arrests against Ukrainian intellectuals, which resulted in his expulsion from the Institute of Literature and the end of his budding literary career. Between 1965 and 1972, Stus had to look for manual jobs to provide for his family. His being a persona non grata in the official literary establishment did not prevent him from continuing writing both poetry and criticism. Around 1970, he produced two major collections of poetry, titled respectively Zymovi dereva (Winter Trees) and Veselyj cvyntar (The Merry Cemetery). Zymovi dereva was smuggled to the West and published in tamizdat. Veselyj cvyntar was published in samizdat and distributed among a handful of friends and colleagues of Stus’. The differences in style between the two collections are striking. While Zymovi dereva, being conceived as an anthology of Stus’s poetry of the Sixties, is a kaleidoscope of strikingly different styles and thematic clusters, Veselyi cvyntar is a rather monological poetic construction devoted to dismantling the absurd of Soviet everyday life and its language.

In early 1972, together with several other Ukrainian intellectuals, Stus was arrested. He spent most of the year in a KGB building in central Kyiv awaiting his condemnation. During those months, Stus’s poetry came to full maturity. In 1972, Stus’s original production was complemented by a wide selection of translations of Goethe’s poetry, which came to constitute the second part of his collection Čas tvorčosti / Dichtenszeit (Poetry time / Dichtenszeit). The book, hermetic in style and thematically subject-centred, clearly shows Stus’s intertextual dialogue with the European modernist tradition of the first half of the century. Between 1973 and 1979, Stus served his sentence, first in Mordovia and then near Magadan. During those years, Stus never abandoned his literary endeavours. This resulted in the production of his major book of poetry, titled Palimpsesty (Palimpsests), and in a not less impressive collection of translations, mostly from German poetry. In this respect, it is worth noting that the most recurrent theme in his letters to his family is Rilke’s poetry and the challenges that Stus faced translating it. In 1979, Stus could go back to Kyjiv. However, his intense political engagement with the dissident movement led to his second arrest in 1980. In the notorious Perm’-36 labour camp in Kučino, near Perm’, Stus’s already precarious health conditions deteriorated considerably. He died in September 1985. In 1989, Stus’s remains were transferred to Kyjiv. The event, attended by an impressive amount of people, has been described as a major event in the months that preceded the collapse of the Soviet Union and Ukraine’s declaration of independence.

While Stus soon became one of the founding myths of independent Ukraine, his poetry quickly came to be seen as an embodiment of its author’s political engagement. This has often resulted in unsatisfactory readings of Stus’s literary legacy as a mere mouthpiece for Ukraine’s national ambitions. Stus’s poetry is rather to be viewed as a reactivation of that rich modernist impulse in Ukrainian literary culture that had been tragically interrupted in the Thirties with the physical annihilation of a large cohort of writers and intellectuals. Stus’s intense intertextual dialogue with poets such as Rilke, Pasternak and Cvetaeva testifies to the depth of his engagement with modernist literature, while his letters explicitly show his conscious desire to act as a leading innovator of Ukrainian literary culture.