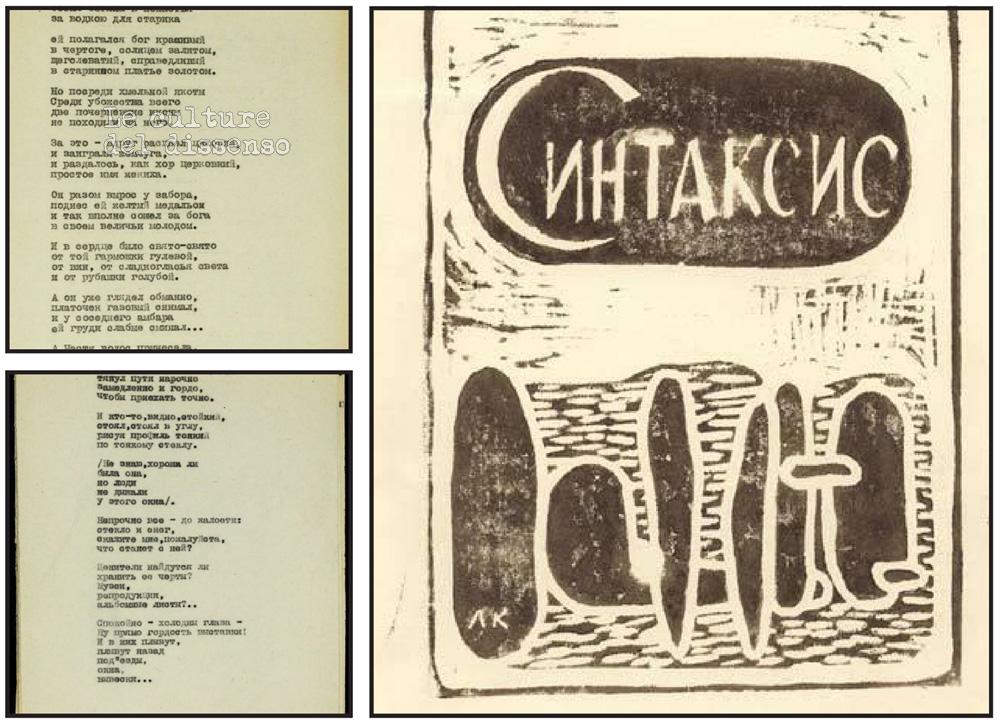 DESCRIPTION:
Sintaksis was a merely literary almanac released from December 1959 until April 1960 among the first samizdat magazines. It was published in three numbers (n. 1 – December 1959; n. 2 – February 1960 and n. 3 – April 1960).
The young director Aleksandr Ginzburg was in close contact with Lianozovo’s group and participated to the gatherings in Mayakovsky Square: after Sintaksis was closed, precisely right there, in 1961, he took part to the gathering and in front of the young people present he red the poem Chelovechesky manifest (Human manifesto) by Yuri Galanskov. Then the poem was included in another illegal almanac Feniks, that would be born soon.
Compared to other magazines spread later, Sintaksis’ peculiarity was its circulation in two cities, Moscow and Leningrad. The almanac contained poetic voices of some tendencies different from the first generation, all included in the first and second number, and also from the second generation: the last and third number was completely dedicated to originating and active poets in Leningrad, like Iosif Brdosky, author of 5 poems (including Evrejskoe kladbishe okolo Leningrada, The Jewish cemetery near Leningrad, and Zemlya, Earth) Dmitry Bobyshev, Gleb Gorbovsky, Viktor Golyavkin (author of a few short sketch in prose like Gvozd v stole, A Nail in the table, published in nr.3 in 1960) and Mikhail Eryomin.
Sintaksis’ publication was stopped in 1960, when Ginzburg was accused and arrested for anti-Sovietic propaganda, then sentenced to two years in prison. The editor was intent to prepare a number dedicated to Lithuanian poets, but this was never issued.
Sintaksis’ experience also came across the Iron Curtain: the emigration magazine «Grani» republished the three numbers in its nr. 58, in 1965, then in 1966 a few poems were translated in Italian in the anthology Da riviste clandestine dell’Unione Sovietica (From illegal magazines of Soviet Union) edited by Nicola Sorin (Sergio Rapetti’s pseudonym) and published by Jaca Book.

Numbers had different edition: 300 copies (nr. 1 and 2) and 120-130 copies (nr.3). The count has been realized on the basis of a collection available on http://rvb.ru/np/publication/05supp/syntaxis/syntaxis.htm (11/2018). Number 1 and 2 copy (1959, 1960) coming from M. S Sergenko’s collection (Research Centre for East European Studies University of Bremen is digitized on University of Toronto’s site https://samizdatcollections.library.utoronto.ca/islandora/object/samizdat%3Asintaksis (12/2018).

© The images relating to the issues of the magazine are available on the website:

https://samizdatcollections.library.utoronto.ca/islandora/object/samizdat:root and were granted by the Institute for Eastern European Studies at the University of Bremen (Forschungsstelle Osteuropa an der Universität Bremen).