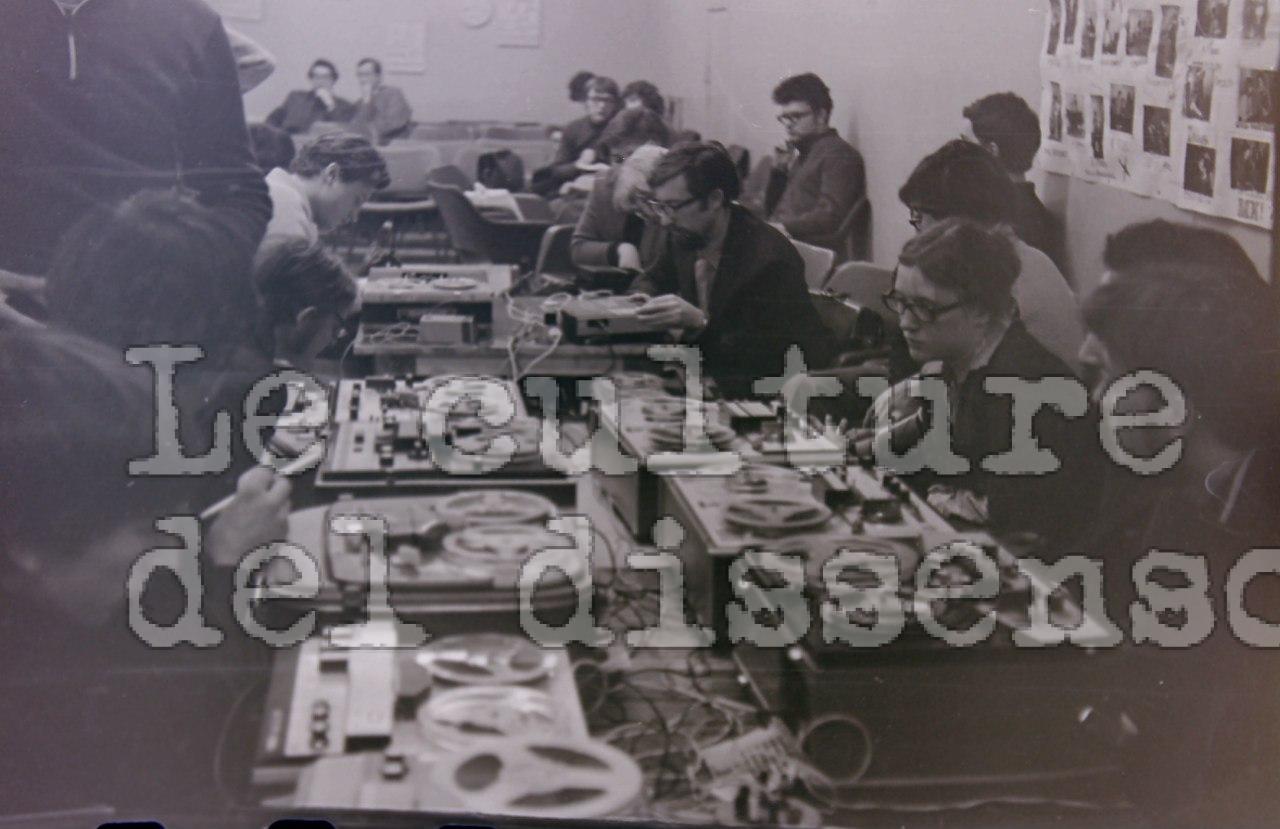 The clandestine circulation of magnetic tapes and music supports was widespread throughout the Soviet Union but was concentrated in some circles revolving around the clubs of independent songs (Klub samostojatel’noj pesni, KSP) and especially some collectors. Although their exact number is difficult to establish, some notable figures emerge from the group of young music lovers and enthusiasts who contributed decisively to the dissemination and, subsequently, the preservation of these sound materials. These figures had different educations, interests and degrees of involvement in the dissemination of sound materials through unofficial channels. Some were already very active in the practice of Samizdat, while others limited their activities to a particular genre or period of their lives.

In chronological order, one of the first protagonists was Edmond (Edik) Nikolaevič Dëmin (1929–1997). His legacy was preserved and enlarged by Pëtr Trubeckoj (1958) from around 1998, making it one of the most important archives (fonoteka) still present in Russia. Dëmin was the director of the Moscow Municipal Section of Water Tourism, but he became much better known among the post-war youth for recording everything he could hear from the early 1950s: concerts and songs performed on short-haul trains, at large gatherings (slët) outside the towns and in territories on the periphery of the Soviet Union. Dëmin soon became the driving force behind the first Magnitizdat, and many ‘sung poetry’ enthusiasts—both authors and performers—gathered around him. In those early days, many songs could only be heard at his home. After his death, his wife Zarja Akeksandrovna and his daughter Marija turned to Trubeckoj to determine how best to dispose of his archive. Trubeckoj decided to take responsibility for the preservation of Dëmin’s legacy and to scan all his notebooks and digitalise the archive. To carry out this complex work, Trubeckoj asked for help from Dëmin’s friend, Viktor Vladimirovič Redin (1934), a curator of sound archives whom Dëmin introduced to the world of KSPs in 1962. Trubeckoj now edits the Redin archive of tape recorders and sound material.

In Leningrad, Vladimir Kovner (1937), a mechanical engineer and translator who later immigrated to the United States in 1979, was active in both Samizdat and Magnitizdat. In 1960 and 1961, he established his first relationships with some fans of non-mass music, including Michail Černichovskij (1938–2001), then “one of the most active speakers of the Magnitizdat and Samizdat in Piter” (Vestnik, no. 7 (344) 31 March 2004), as Kovner states in a evocatively titled memoir The Golden Century of the Magnitizdat. In the atmosphere of relative dissension and freedom of the Thaw during the early 1960s, Černichovskij used to broadcast at lunch time songs by Bulat Okudžava, Aleksandr Vertinskij and many others recorded by Kovner at the local radio he worked for. The initiative eventually attracted the attention of the CPSU and was immediately ceased. A decade later, in 1973, Černichovskij edited a book collection of songs by Aleksandr Galič, accompanied by several shots by journalist and photographer Michail Balcvinik (1931–1980), an active disseminator of Samizdat material and a great collector of Vertinskij’s music.

In the dynamics of sound track diffusion, technology often played a prominent role, especially influencing the quality of the recorded material. The name of Boris Rachlin acquired a certain importance in this regard due to the cumbersome recording equipment he installed in the one-room apartment in Leningrad where he lived with his wife and two children. The equipment considerably improved the quality of the recordings, boosting their dissemination. In 1973, Rachlin released an album entitled Criminals’ Songs (Blatnye Pesni), in which he interpreted a cycle of criminal songs, imitating the voice of the famous singer Leonid Utësov. In a very short time, the album spread throughout the country as ‘Utësov’s tape’, to the great disappointment of the Russian chansonnier who did not appreciate the tribute.

Similar to Rachlin, Gidalij (Gennadij) Moiseevič (1906–1967) promoted three initiatives of great importance in the history of singers and songwriting in the 1960s. Once the director of the Union of Writers’ Shop on the Nevskij Prospekt, Moiseevič was condemned during the Leningradskoe delo. After serving a sentence in Stalin’s labour camps (1949–1956), he was ‘rehabilitated’ by the Soviet State and became director of a poetry shop next to the Marinskij Theatre, where a sort of club of poetry lovers soon formed. In 1965, after the staging of Bertold Brecht’s The Good Soul of Sezuan, Jurij Ljubimov, the director of the new Teatr na Taganke, along with some actors in the troupe, was invited to the home of Moiseevič and Lija Jakovlevna Rachlin. Among the actors attending was Vladimir Vysockij, whom Ljubimov requested to sing. On 23 April 1967, the meeting was repeated, and a third took place on 9 May 1967. As Kovner points out, “these three home concerts by Vladimir Vysockij and other Taganka actors at G.M. Rachlin’s house were undoubtedly a significant event in the history of the development and dissemination of the bard’s songs”.

From the mid-1960s onwards, the fate of ‘guitar poetry’ became increasingly linked to the name of Vladimir Frumkin (1929), a musicologist, writer, radio journalist, Russian language teacher, specialist in Dmitrij Šostakovič and one of the first theorists of songwriters, who did not have a well-defined genre or status then. From 1964 to 1968, Frumkin was the presenter at the literary and musical evenings of the famous Vostok, the first club of guitar poetry founded within the House of Culture by food industry workers in Leningrad. Frumkin gained fame with his essay Music and Word (Muzyka i Slovo), read in May 1967 on the banks of the river Kljaz’ma, near Petuški (Vladimirskaya Oblast’) during the first National Seminar on the Problems of Independent Song attended by many songwriters from Moscow, Leningrad, Novosibirsk and Minsk. Frumkin soon became friends with Okudžava, Galič, Julij Kim, Aleksandr Gorodnickij and many others, and he maintained relationships with them even after immigrating to the United States in 1974 to actively promote guitar poets on American soil. Kovner recalls that before departing, Frumkin and Michail Kryžanovskij (1943–1994) prepared 12 cassettes of good-quality recordings of songs by various authors. Frumkin took with him songs by Okudžava and Vysockij, while he sent Galič’s songs through the US embassy. However, customs staff demagnetised all the tapes Frumkin tried to smuggle out of the Soviet Union, while the package with Galič’s tapes disappeared mysteriously. In 1980 and 1986, Frumkin succeeded in publishing two collections of Okudžava’s songs with musical notes (scores), Russian and English lyrics and very suggestive photographs.

Engineer and physicist Michail Kryžanovskij, a major activist in the Vostok during the 1970s, became one of the greatest collectors in Leningrad and the guardian of the songs of 104 writers. During perestroika in the late 1980s, Soviet record company Melodija turned to Kryžanovskij to print on disk the complete collections of the greatest songwriters.

It is also interesting to mention some figures who moved outside the borders of the Soviet Union, particularly Aleksandr (Alik) Štromas (1931–1999), a historian and publicist of Lithuanian origin, professor of political studies at various universities in the United States and United Kingdom and long-time friend of Kovner. In 1974, together with a third friend, they released the first album of Galič’s songs that Štromas managed to print abroad. Štromas’s impressive archive is now preserved in his hometown of Kaunas, Lithuania.

In 1977, Vladimir Efimovič Alloj’s (1945–2001) monumental work The Songs of the Russian Bards (Pesni Russkich Bardov) appeared in Paris. It included 40 cassettes presenting a vast panorama of guitar poetry, including lesser-known performers within and outside the borders of the Soviet Union. The collection was accompanied by four volumes with the song lyrics. Although the first edition had poor sound quality, and the volumes contained many errors and mistypes, it remains a milestone in the field of musical tamizdat.

Finally, on the rock music front which had spread (always unofficially) in the Soviet Union since the 1970s, it is worth mentioning Joanna Stingray (born Joanna Fields, 1960). In the 1980s, this American singer and actress became a central figure in the diffusion of Russian-Soviet rock music in the West. After a trip to Leningrad when she met Boris Grebenščikov (1953) and other protagonists in the rock scene of the time, she began to smuggle their music abroad. In 1983, she released the double album Red Wave: 4 Underground Bands from the Soviet Union (Big Time Records, Australia), which contained songs by Akvarium, Kino, Alisa, Strannye Igry and others. It was the West’s first contact with Soviet rock music.