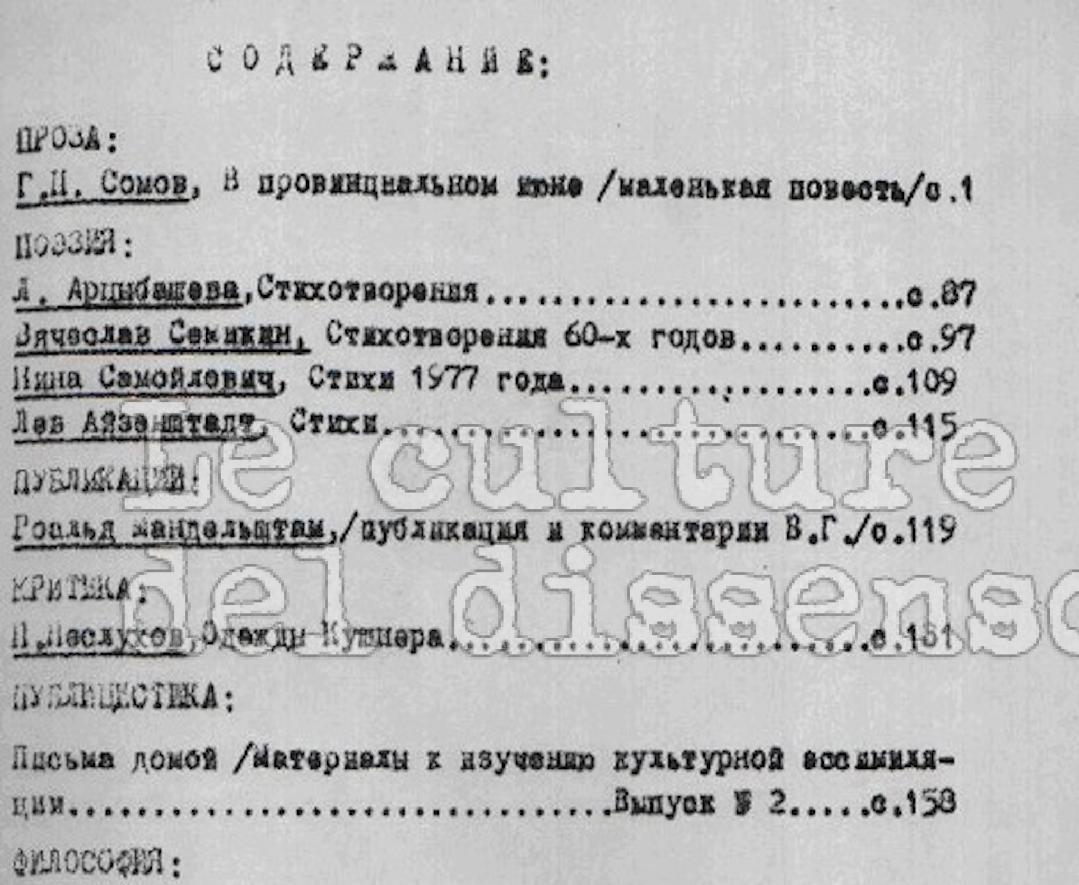 DESCRIPTION:
The periodical was published in Leningrad between 1976 and 1990 directed by Boris Ivanov. It was founded at the same time as the magazine «37» and, had it been published, would have coincided with the release of the Lepta poetry anthology by «Sovetsky Pisatel». The name «Chasy» (The Clock) was coined by Ivanov to underline his intention that the periodical be regularly and uninterruptedly published. Indeed, unlike other extemporaneous projects from this time, which were less coordinated or long-lived, «Chasy» was published every two weeks and was the longest running journal to be circulated by samizdat. The success of the journal depended on its committed editorial team as well as the decision to charge between 12 and 15 roubles per copy which paid the typists.  The minimum number of copies made for each issue was 10, but many others were made clandestinely.  Copies of the journal circulated widely, finding their way to Moscow, Kiev, Odessa, Sverdlovsk, Tallinn and Riga. In the early period, there was an attempt to collaborate with the rival Leningrad journal, «37», which led to the sharing of some resources, but the differences in vision between Viktor Krivulin and Boris Ivanov were too marked to bring about a fusion of the two magazines. Indeed, «37» favoured a more philosophical-religious approach to literature while «Chasy» was more interested in aesthetics, had a broader philosophy and placed greater emphasis on prose and Western literature. This area was entrusted to Boris Ostanin who from the fourth edition acted as co-editor. Until 1978, the journal was largely a literary almanac, but after the eleventh issue it began to take the form of a literary review, with a greater focus on editorials and the introduction of a news section edited by Jurij Novikov and Sergej Sheff which included descriptions of important unofficial literary cultural events, such as exhibitions, literary meetings in private houses, poetry readings, unofficial conferences, and reports to the philosophical-religious seminar.  Jurij Novikov, together with Sergej Koval’skij, Sergej Sheff and Viktor Antonov was also responsible for the figurative art section. From 1978 other figures such as Igor’ Adamackij, Vjacheslav Dolinin, Arkadij Dragomoshchenko and Sergej Korovin began to collaborate more closely.
A key figure from the first issues of the periodical was Julija Voznesenskaja, who was responsible for the poetry section. The refusal of the state to allow the publication of the Lepta anthology which would have given a voice to unofficial poets in Leningrad had given rise to a proliferation of underground publishing projects, many of which found support among the editors of «Chasy». Poetry collections by Sergej Stratanovskij, Elena Ignatova, Viktor Krivulin, Leonid Aronzon and Elena Shvarc were published as appendices to the periodical as were prose works by Michail Berg and Arkadij Dragomoshchenko and literary criticism by Grigorij Pomerants.
The editors always adopted a flexible approach to content; there were articles on the figurative arts, on musicology – in the 1980s there were articles on rock and jazz (n. 31, n. 33)-  or on scientific questions, for example in n. 33 of 1981. Sometimes there were texts on civil rights and political thought such as by Revol’t Pimenov (n. 73 and n. 79). In the 1970s, especially, many pieces were included on religion and philosophy, several of which were written by Boris Ivanov himself (such as on existentialism in n. 10), or by Tat’jana Goricheva and Boris Grojs (pseud. Suitsidov) who had been part of the «37» editorial team.
Most of the journal’s content, however, focused on prose, poetry, literary criticism and translation. Amongst Leningrad’s prose writers to be published by «Chasy» were Andrej Ar’ev, Arkadij Bartov, Igor’ Adamatskij, David Dar, Evgenij Zvjagin and Fedor Chirskov, while amongst the poets were Leonid Aronzon, Roal’d Mandel’shtam, Dmitrij Bobyshev, Petr Brandt, Tamara Bukovskaja, Evgenij Venzel’, Sergej Stratanovskij, Elena Ignatova, Viktor Krivulin, Elena Shvarc, Lev Losev, Oleg Okhapkin, Evgenij Rejna and Ėduard Shnejderman. «Chasy» was less exclusive than «37» and published the works of many authors who are not found in other periodicals.   Indeed, the works of more than 400 authors were published by «Chasy», including 100 foreign writers. The journal also gave an important platform to Muscovite writers such as Sergej Gandlevskij, Ėduard Limonov, Dmitrij Prigov, Ol’ga Sedakova, Bakhyt Kenzheev and Vladimir Alejnikov.
Among the translators who worked for the periodical were M. Iossel’, B. Ostanin, V. Antonov, M. Khanan, S. Khrenov, V. Kucherjavkin and T. Goricheva. An excerpt from The Myth of Sisyphus by Albert Camus translated by Rid Gračev was published in issue n. 3 of 1976 (pp. 150-228), which followed Gračev’s own prose work Adamčik which had appeared in the preceding issue. «Chasy» also published works in translation by C. Castaneda, K. Jaspers, E. Ionesco, S. Beckett, W. Yeats, R. Barthes, C. S. Lewis and A. Robbe-Grillet, all of whom had a significant influence on Leningrad’s literary scene.
In 1978, the editors of «Chasy» created the Andrej Belyj Prize, still awarded today, as an alternative to the official Soviet prizes for literature awarded at this time. In 1980 thanks to the guidance of Boris Ivanov and Igor’ Adamackij, «Chasy» was instrumental in making an agreement with the Soviet authorities for the foundation of Klub-81 in Leningrad, an association controlled by the authorities of unofficial artists and writers with the aim of bringing into the light and publishing clandestine works that had been circulated by samizdat. In number 35 of 1981 (pp. 292-297), there appeared a detailed account of the birth of Klub-81 and the text of its statute. Throughout the 1980s, the periodical represented a free space for debate and for documenting the activities of Klub-81 as well as a focus for the discussions fuelled by the publication of the Krug anthology of poetry(1985), by Sovetsky Pisatel. In the periodical’s last issue (80, 1990), in the final section titled K istorii kul’turnogo dvizhenija (To the history of the cultural movement), Igor’ Adamatskij published some extracts of the book he was writing, with the title Klub-81 (vnutri i rjadom). This was the final statement of the journal, which stopped publishing when the censorship laws were repealed, freedom of the press returned, and editorial restrictions lifted.

NOTES:
The periodical usually published 10 editions a year, of between 200 and 300 pages each. Cataloguing was based on the digitalised copy of the samizdat collection of the Andrej Belyj Centre in San Petersburg (http://samizdat.wiki/index.php/Архив_журнала_«Часы»). Original copies are kept at the Memorial Archive of San Petersburg and at Forschungsstelle Osteuropa – FSO Research Centre for Eastern European Studies at the University of Bremen (https://www.forschungsstelle.uni-bremen.de/)